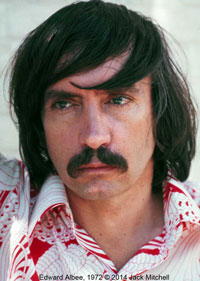 It is said that there is among some primitive tribal people a fear unto loathing of the camera and its issue - a sense that the lens is the eye of the devil, the photographer evil’s agent, that the negative goes directly into hell’s files, and that being photographed results in the loss of the subject’s soul or, certainly, its diminishment.

If there is validity to this idea then the photographed subjects of Jack Mitchell’s extraordinary Icons & Idols haven’t a shred of soul left for they have been, as the title of the book suggests, framed, focused, and rendered - with full complicity - over and over and over, though not often as accurately, as persuasively as in Jack’s portraits.

I put this to you with some authority, I think, for I have known or know or have met most of the people herein pictured and am constantly startled how much of the “soul” of each one has been captured in these photographs, and by this I mean how much each of the images is precisely the individual I know.

How can Jack Mitchell see with my eye, how can he let me see, touch, even smell my experiences? Well, simply enough, he is an amazing artist. 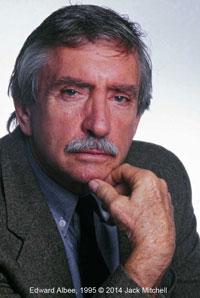 Some of the portraits are more evidently “posed” than others, usually those of those whose reflected image has been wisely calculated through the public years - Bernstein, Nevelson, Sills, and Lansbury, for example - but they are dead on and accurate, and are, I guess, the poses I have witnessed.

Others of the portraits - my own favorites - the “warts and all” photographs as I think of them: Christopher Isherwood, Sam Barber, Virgil Thomson, Erich Leinsdorf, Rudy Nureyev for example - while they are clearly not candid shots of the unaware, seem to me to dig even deeper into the subjects, to capture even more of their essence; perhaps the pose and the person are still unconsciously wedded.

Jack Mitchell is perhaps most famous for his photographs of dancers, and I have never seen a portrait of a dancer which captures the power, the grace, the ethereal density of those who perform that wondrous art more persuasively than the composition of Louis Falco.

This book is a sampling of thirty-five years of Jack Mitchell’s photography. There are very few photographic artists who have so accurately and humanely witnessed.

Reprinted by permission of the author.